After 6 years developing Python Flask applications, mainly REST API’s, in 2019 I still could not find any good articles about how to develop high value tests for Python Flask based applications. That is going to change today!

First I will give my opinion on testing and methodology, followed by a demo case to illustrate high value testing with actual code. Feel free to skip all the boring reading and head directly over to the code on Github.

The foundation described in this article is mainly focussed on early projects with limited resources like time and people effort. In these cases you want the lowest possible investment that will generate a high return in value. Note, however, that this is not a silver bullet.

As a software engineer that has built many microservices in the past, I have always believed that having integration tests in the early stages of a product is of utmost importance to detect issues and confirm assumptions. Nowadays it is rare to build fully self contained systems that do not interact with other external systems. This external system could be a webservice or perhaps a complicated library that renders PDF files.

My definition for “High value tests” is inspired by High Cost Tests and High Value Tests: A test case that is efficient and effective that focusses on business logic we have implemented.

Let’s dissect this statement. We want our tests to be efficient, because it is not funny to wait for hours for a test case to finish to discover it failed. Or it demands many resources like compute power or manual labor which could be very costly. Effective because we are only interested in interfacing with a third party library or web service but not their inner workings. Finally there is emphasis on we. Our system is often a composition of one or more other components working in harmony. Full complexity of systems are in fact all the code you have produced together with the code of all your dependencies and their dependencies. As you might have guessed already in practice systems are often very complicated. As we do not have access to infinite resources we have to get the most out of our investments so we test the interfaces of these external dependencies only.

In practice good test cases are a balance between depth (when do we include external dependencies), simplicity and flexibility.

Following the AAA (Arrange, Act and Assert) pattern we define the anatomy of a good high value test case to have the follow components:

Other non-functional requirements are:

Let’s consider a simple Flask app that uses a hypothetical mail service implemented as MailService. Below is the file and directory structure of our application with 4 test cases implemented in 2 files (test_errors.py and test_health.py). We will dive deeper into the code in the rest of this section.

In the app we have defined two REST endpoints:

Test cases are often located in the tests directory. Each test case is implemented as a TestCase class. The below class diagram depicts the high level composition of such a TestCase. 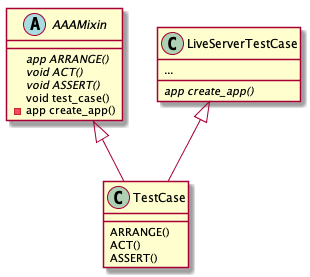 Our test suite contains 4 test cases grouped in 2 files. The test cases are all implemented according to the AAA principle.

Before we start writing our test cases we first define our AAAMixin class which implements a basic structure according to the AAA methodology discussed earlier. We will use this mixin class later in our test cases. To void the assert keyword we write the main AAA methods which must be implemented by all test cases: ARRANGE(), ACT() and ASSERT().

The AAAMixin class is tightly coupled with the LiveServerTestCase class. Therefore the flow of execution differs a bit than conventional test cases. The following methods are executed in this order:

If we disregard non AAA related methods we will see that the AAAMixin forces us to stick to the AAA pattern. It is therefore sufficient for us to implement just these 3 methods to compose our test case.

With the AAAMixin defined we can combine it with LiveServerTestCase from flask_testing package to write our first test case for GET /health. This test shows how we can use the AAA approach with a live server instance of our app to test against a real MailService instance.

In a real world scenario the MailService could slow down our test. We could have a very limited set of integration tests of this service and mock it most of the time. Mocking is very useful because it’s fast and that’s were we set our boundaries of where we stop testing logic that was not implemented by us (with the assumption the third party library is well tested on its own).

Enough text, let’s see how all of this works:

The two warnings are from the jinja2 library version we are using.

Our final test cases adhere to:

With the ability to running our tests againt a live server over HTTP, this allows us to test our APIs in more depth. We also have the choice to decide how deep we wish to test, because of the ease of mocking individual pieces of our application. For this to work, our App.create_app() must be able to accept instances to be mocked. Alternatively, one could explore the possibility of monkey patching.

This test suite is currently being used by a medium sized Python REST API service. It has sped up our development significantly, and onboarding new developers was a breeze.

Check out the code on Github

In the future we will extend this simple REST API with MySQL database support. In the light of high value tests we will also extend the test suite with support for launching MySQL service to support our tests. As our test suite grows, there will be demand for parallelization.